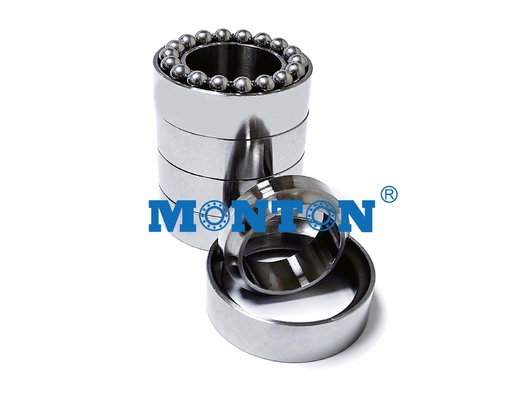 Whether you’re drilling for oil or gas, the bearings in a mud motor at the end of a drill string have a direct impact on productivity and reliability. These mud motor bearings have to endure extreme

Down hole motor or drilling motor for the oil drilling industry

Bearing Assembly of Downhole Motor is used to transmit motor rotary dynamic force to the bit, meanwhile to withstand axial and radial load from drilling weight. Inside of the Bearing Assembly,Monton uses TC Radial Bearing and a stacked thrust bearings. The thrust bearings support the downward force resulting from the “weight on bit” (WOB) and the loads from the combination of hydraulic thrust and weight loads from internal components.Monton provides different bearing assemblies, designed to meet the diverse requirements of the drilling industry.

Mud motor bearings, or ball bearings have conventionally been used to react thrust, or axial, loads in down hole mud motors. When low rpm power sections are used in the application such bearings provide sufficient life and reliability. However, bearing component fatigue causes life to decrease linearly as speed increases. This fatigue makes ball bearings unsuitable for high rpm motors. Standard engineering practice dictates that ball bearings are specified according to L10 life, or the number of revolutions a group of identical bearings is expected to sustain before 10% fail. As revolutions are related to speed, bearings operating in a higher speed motor will fail before those operating in a low speed motor, e.g. one could roughly expect a 90% reduction in bearing life if speed was increased from 100 to 1000 rpm. In addition to life, friction and horsepower losses are often of interest in drilling. Ball bearings are referred to as frictionless bearings due to the rolling nature of the elements, however in practice frictional losses exist due to rolling resistance and sliding. An order of magnitude approximation of the coefficient of friction (cof) for an angular contact bearing operating in ideal non-abrasive lubricant conditions is 0.0032.1 In drilling mud, the cof can be assumed to be significantly higher.

The function of the bearing assembly in a positive displacement drilling motor is to support axial load (typically weight on bit) and centralize and support side loading on the motor’s driveshaft. The bearing assemblies used in drill motors have been developed for use in different applications with certain motor configurations offering a choice of axial bearing type options. All MONTON bearings are fluid-lubricated and optimized for specific drilling applications.

Ball Bearing The Ultra Ball Bearing assembly has been improved over the years and suits for the majority of drilling applications. These bearings are used on various power sections where moderate weight on bit and drilling torque are required. With the introduction of high power Ultra drilling motors with an increased torque output, the ball bearings have been continuously improved to handle it.

The ball bearing assembly is the bearing of choice for many applications as modern PDC bit designs demand higher torque, available from today’s drill power sections. This bearing assembly is suited to more demanding applications using low or medium speed motors, where the objective is to increase drilling performance by driving more torque to the bit.

The 6 ¾ in. extreme™ ball bearing assemblies have been developed to maximize performance and reliability in challenging drilling environments and are reserved for exclusive use with the extreme motors. Also featuring an increased internal diameter, this bearing type allows for a step-change in torque capacity of the motor driveshaft-necessary assuring reliable delivery of the massive torque generated by the extreme power section.

The bearing sub assembly transmits the torque and speed of the rotor, as well as the compressive load from the bottom hole assembly (BHA). The primary components of the bearing assembly are the driveshaft, bearing housing, radial bearings, and axial bearings.

The axial bearings are a stacked ball-and-race design that provides durable performance down hole while maintaining ease of repair. The bearing assembly is also a mud-lubricated design in which the drilling fluid provides lubrication to both the radial and axial bearings while drilling. An advantage of mud lubrication is that there are minimal limitations on bit pressure drop compared to sealed bearing assembly. The bit pressure drop can be maximized for optimum penetration rate without adversely affecting the life of the bearing subassembly. Also, because mud-lubricated bearing subs assemblies do not contain any elastomeric seals, they can be run in the highest down-hole temperatures and in highly aromatic drilling fluids without fear of degradation. The bearing housings are available with a threaded outside diameter for screw-on stabilizers for tool sizes with an outside diameter greater than 5”. This option allows the stabilizers to be changed in the field.

The first generation, mud-lubricated bearing subassembly is a field-proven design that has been deployed in most drilling applications. The M1 is ideally suited to be run with Flex Drill power sections.

this energy to the drill bit through the bit box. Drilling parameters, such as weight on bit (WOB), circulation rate, and bit differential pressure directly affect the bearing section.

The Monton bearing section is an open bearing design (i.e. the bearings are lubricated by the drilling fluid). Monton uses a stacked multiple ball-and-race design for the thrust bearings (see Figure 5). An open bearing system offers

the advantage of allowing higher differential pressures across the drill bit over a traditional sealed bearing arrangement.

imbedded in a tungsten carbide matrix for maximum wear resistance from side loads.

About the redesign process

Specially designed to provide excellent radial load support for both sealed and mud motors, Monton tungsten carbide radial bearings are made using a unique microwave sintering process (resulting in 1 600 Vickers hardness) as compared to typical conventional sintering (with 1 000 Vickers hardness). This results in a high hardness of 92 HRa for excellent wear resistance and longer life.

• accurately define the behavior of a bearing stack

• test new designs and materials. With the Monton virtual test rig, engineers were able to identify and correct the problem of cracked rings and sheared balls – two common problems with these bearing

Monton has innovative seal designs and quality materials for downhole rotating seals exposed to high pressure. The Monton Teflathene seal incorporates a low-friction PTFE seal ring bonded to a rubber body. The all-rubber DM2 seal separates drifting mud from lubricants in oil-lubricated mud motor bearings. Bottom hole assembly (BHA) tools such as shocks and jars require seals to protect the tool hydraulics from the abrasive drill muds and cuttings in the hole. Measure-while-drilling (MWD) tools sometimes require high-temperature sealing solutions.Monton has developed a full line of field-proven seals to work in this demanding environment, including a seal capable of withstanding up to 315 °C (600 °F).

How the new bearing works

The typical mud motor bearing contains between 8 and 12 rows for design optimization. When the bearing is new, the majority of the load is accommodated by the first four or five rows . As

• Special steel for all bearing components