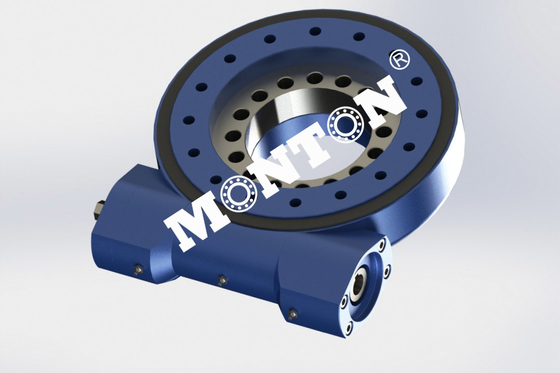 Payment & Shipping Terms
Packaging Details: Single box/Wooden case
Delivery Time: 7-35 days
Payment Terms: TT
Supply Ability: 1000/pcs/week
Specifications
Material: 50Mn Or 42CrMo
Delivery: 20 Working Days
Application: Solar Tracker And Wind Turbine Or Contruction Machines Or Equipment
Range: 50~500mm
Production Ability: 20000pcs/month
Market: Spain,USA,Russia,etc
Keywords: Heavy Slewing Drive For Construction Machinery
Gallery
Product Description
The slewing drive is a gearbox that can safely hold radial and axial loads, as well as transmit a torque for rotating. The rotation can be in a single axis, or in multiple axes together.
Slewing drives are made by manufacturing gearing, bearings, seals, housing, motor and other auxiliary components and assembling them into a finished gearbox.
Introduction:
By adopting slewing bearing as its core component, slewing drive can bear axial force, radial force and tilting moment simultaneously. Slewing drive is widely applied in modular trailers, all types of cranes, aerial working platform, solar tracking systems and wind power systems.
Electric and planetary gearboxes can be designed according to customer’s requirements. Slewing drive has the advantage for saving space in facilities, max load capacity in a compact design, extensive lifespan, and reduced maintenance costs.
Glossary
1) Tilting Moment Torque: Torque is the load multiplied by distance between the position of load and the center of slewing bearing. If the torque generated by load and distance is greater than the rated tilting moment torque, slewing drive will be overturned.
2) Radial load: Load vertical to the axis of slewing bearing
3) Axial load: Load parallel to the axis of slewing bearing
4) Holding torque: It is the reverse torque. When the drive is rotating reversely, and parts are not damaged,
5) The maximum torque achieved is called holding torque.
6) Self-locking: Only when loaded, the slewing drive is not able to reverse rotate and thus called self-locking.

1.Different motors(AC,DC,Hydraulic) can be designed according to customer’s requirement.

2.Shaft opposite to motor can choose to be hex head or not hex head.

History
The slewing drive is a modernized take on the worm drive mechanism that dates back many centuries and was widely used during the Renaissance Era. Pappus of Alexandria (3rd century AD),

a Greek mathematician is credited for an early version of the endless screw, which would later evolve into the worm drive.This mechanism was also used by Leonardo da Vinci as a component in many

of his designs for machines.It can also be found in the notebooks of Francesco di Giorgio of Siena.Many slewing drive concepts found prominence with the emergence of larger scale construction and

engineering in the height of the Greek and Roman Empires.

Slewing drives function with standard worm technology, in which the worm on the horizontal shaft acts as the driver for the gear. The rotation of the horizontal screw turns a gear about an axis perpendicular to the screw axis.

This combination reduces the speed of the driven member and also multiplies its torque; increasing it proportionally as the speed decreases.The speed ratio of shafts depends upon the relation of the number of

threads on the worm to the number of teeth in the worm wheel or gear.

As technology has improved, more slewing drives are using hourglass worm technology, in which the worm is shaped to engage more teeth in the gear.This increased tooth engagement results in greater

The drives are well suited for applications that require both load holding and rotational torque from the same gear box.

They can also be made with dual axes of rotation, (turning axes at the same time) or with dual drives on the same axis, (two worm threads driving the same ring gear in one axis).

According to an extensive series of tests by the Hamilton Gear & Machine Co., chill-cast nickel-phosphor bronze ranked first in resistance to wear and deformation. Number two on the list was SAE No. 65 bronze.For bronze gears a good casting should have the following minimum physical characteristics:

Applications
There are many applications in which the slewing drive can be utilized, primarily because it is perfect for applications that require both load-holding power and rotational torque strength.