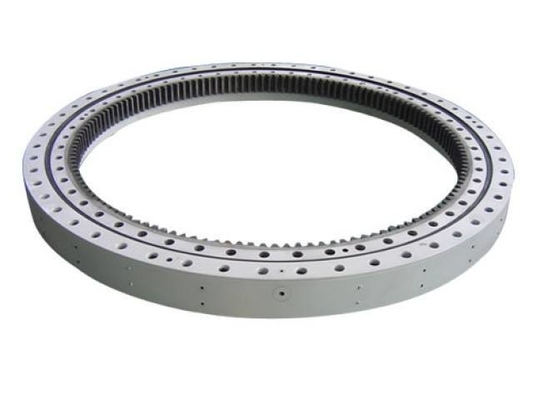 To "slew" means to turn without change of place; a "slewing" bearing is a rotational rolling-element bearing that typically supports a heavy but slow-turning or slow-oscillating load, often a horizontal platform such as a conventional crane, a swing yarder, or the wind-facing platform of a horizontal-axis windmill.

Compared to other rolling-element bearings, slewing bearings are thin in section and are often made in diameters of a metre or more; the slewing bearings on the Falkirk Wheel are 4 metres diameter and fit over a 3.5 metre axle. Slewing bearings resemble oversize aircraft control surface bearings.

Slewing bearings often use two rows of rolling elements. They often use three race elements, such as an inner ring and two outer ring "halves" that clamp together axially.

1, Internal ring
2, External ring
Slewing Ring consist of an internal and external ring with an integrated raceway system and optional internal or external teeth. The normal material is 50Mn.
3, Roller
In Slewing Rings, better rotation and loading transmission are achieved by special design and precision production of the rolling elements.
4, Spacer
Spacers separate the rolling elements and minimize friction and wear.
5, Mounting Holes
The force is transmitted to the mounting structure by bolts. Through holes or threaded holes can be provided in the inner and outer rings for these bolts.
6, Sealing
Polymer seals protect the Slewing Rings from normal dirt penetration, dust and loss of lubricant.
7, Plug hole
The rolling elements are inserted during manufacture through the filling plug hole, retained by the filling plug which is then secured by a pin.
8, Gear
Slewing Rings are designed with optional internal or external gear.
9, Grease nipple
Slewing Rings are designed for grease lubrication which is carried out via grease nipples.
10, ID Bearing type and serial No.

The hardness is in range of HRC50～60, according to the different applications, the gears have the
three types of tooth quenching as follow.

supply the below goods: