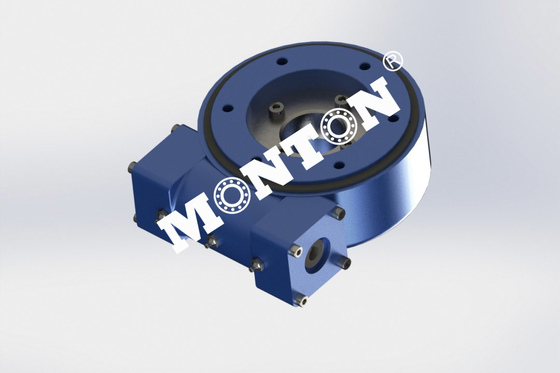 Slewing drives are commonly used mechanical devices, found today in applications such as construction cranes, solar tracking systems and industrial equipment. The basic technology found in these drive mechanisms, however, is very old dating back to Ancient Greece, and employed by Leonardo da Vinci in many of his Renaissance inventions. Modern slewing drives represent the modern evolutions of an ancient and highly effective basic machine, the worm drive or endless screw.
A quality modern slewing drive includes a sound mounting structure, a slew bearing, rotational movement and power controls to facilitate perfect motion. In operation, the drive converts axial movement (force exerted on an axis) into radial/rotary torque, allowing the rotation of greater loads with more accuracy, while also enabling geared torque amplification.

The slewing drive does this by meshing the grooves of a horizontal screw (the worm) with the teeth of a gear placed perpendicular to the screw. The gear rotates as the screw turns, and the screw’s axial movement force is then transmitted to the radial gear as magnified output torque.

While the basic idea behind the slewing drive is not new, the modern incarnations of this device feature many relatively recent innovations. Kinematics’ patented hourglass screw design, for example, increases the number of gear teeth that can be engaged with the worm grooves at once, greatly improving force transition over standard worm designs by meshing much more efficiently with the radial gear. This, in turn, significantly increases the drive’s survivability load, positioning accuracy and rotational smoothness.

Enclosed in a rugged and tested enclosure to protect the mechanism from water, dust, dirt and other particulate contaminants, the resulting Kinematics slewing drive gearbox delivers a powerful means of creating accurate rotational force in many of the world’s most demanding applications.

Our base model sizes deliver performance ranges from 6kNm to 220kNm of holding torque, 200Nm to 63kNm of output torque, 500Nm to 271kNm of overturning moment load capacity, and gearbox reduction ratios of 30:1 up to 156,600:1. The mounting can be done horizontally, vertically, or across a combination of multiple axes. Get detailed specifications.
The vertical slewing drive is generally installed perpendicular to the ground and is widely used in various photovoltaic power generation projects, such as trough power generation. Sometimes the drive end can be installed a vertical slewing drive, and the non-drive end can choose to use a bearing housing.For example, the drive of the flat single-axis system is widely used in this kind of structure. PE series slewing drive is our high precision type slew drive, usually we have three precision grades: I≤0.05°,II≤0.07°and III≤0.09°and this model with enclosed housing, it can prevent dust and water from entering the inside. If customer intends to use solar panels,its can handle 18-30m2 solar panels area.