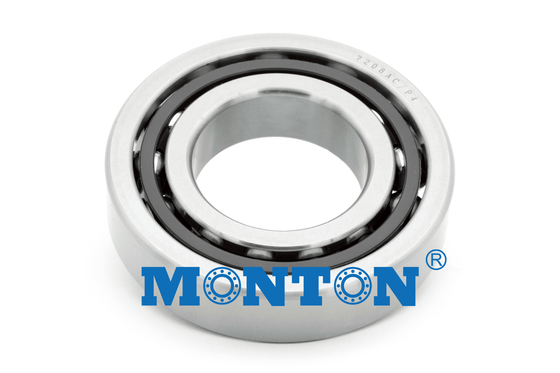 Angular contact ball bearings: 7000C-type (α = 15 °), 7000AC-type (α = 25 °) and 7000B (α = 40 °) of several types. The kinds of bearings in the outer ring lock port, the general separation of inside and outside the ring can not be combined radial and axial load and axial load in one direction. Axial load capacity of the decision by the contact angle, contact angle is greater, the ability to withstand high axial loads. This kind of bearing shaft or housing to limit axial displacement in one direction.

Pretension is made on angular contact ball bearing to increase rididity and accuracy of bearing.

This bearing creates axial thrust load when being forced by radial load,thus it is configured(or combined) face to face or back to back.

Double row angular contact ball bearing can be subinitted radial and acial louding limit speed is quite high, it is non-separated type of bearing has high rigid can be submitted doubk direetion of axial load,the bearing could apply with the four row cylindrical bearing together to limit the working roll to move in axial diretion the double row angular contact ball bearing could apply with other bearings as a position bearing.

Standard structure is that its inner ring is equally divided in axial direction,which is applicable to axial load or combined load,among which acial load is major composition.